Surya Sen (Bengali: সূর্য সেন, born 22 March 1894 – died 12 January 1934) was a Bengali Indian independence activist who was influential in the Indian independence movement (against British rule) who is noted for leading the 1930 Chittagong armoury raid In Chittagong of Bengal in British India (now in Bangladesh). Sen was a school teacher by profession and was popularly called as Master Da ("da" is a honorific suffix in Bengali language). He was influenced by the nationalist ideals in 1916 while he was a student of B.A. in Behrampore College. In 1918 he was selected as president of Indian National Congress, Chittagong branch.

Sen was born on 22 March 1894 at Noapara, under Raozan upazilla in Chittagong. His father Ramaniranjan Sen was a teacher. In 1916 when he was a B.A. student in Behrampore College he learned about Indian freedom movement from one of his teachers. He felt attracted towards revolutionary ideals and joined a revolutionary organization Anushilan Samity. After completing his studies he returned to Chittagong in 1918 and joined as a teacher at National school, Nandankanan . At that time, Indian National Congress was the most prominent political party there.

Sen led a group of revolutionaries on 18 April 1930 to raid the armoury of police and auxiliary forces from the Chittagong armoury. The plan was elaborate and included seizing of arms from the armoury as well as destruction of communication system of the city (including telephone, telegraph and railway), thereby isolating Chittagong from the rest of British India. However, although the group could loot the arms, they failed to get the ammunition. They hoisted the Indian National Flag on the premises of the armoury, and then escaped. A few days later, a large fraction of the revolutionary group was cornered in the nearby Jalalabad hills by the British troops. In the ensuing fight, twelve revolutionaries died, many were arrested, while some managed to flee, including Sen. 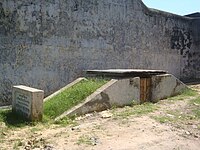 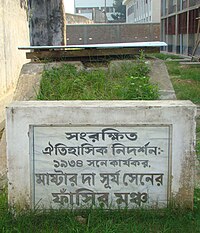 The gallows in Chittagong Central Jail, Bangladesh, where Sen was hanged. The Government of Bangladesh has designated it a historical monument.

Sen stayed in hiding, and kept moving from one place to another. Sometimes he took up a job as a workman, a farmer, a priest, a house worker or even as a pious Muslim. This is how he avoided being captured by the British. He once hid in the house of a man called Netra Sen. But Netra Sen informed the British of his hiding, and the police came and captured him in February 1933. Before Netra Sen could be rewarded by the British, a revolutionary came into his house and beheaded him with da (a long knife). As Netra Sen's wife was a big supporter of Surya Sen, she never disclosed the name of the revolutionary who killed Netra Sen. Before Sen was hanged, he was brutally tortured by the British. The British executioners broke all his teeth with a hammer, and pulled out all his nails. They broke all his limbs and joints. He was dragged to the rope unconscious.

His last letter was written to his friends and said: “Death is knocking at my door. My mind is flying away towards eternity ...At such a pleasant, at such a grave, at such a solemn moment, what shall I leave behind you? Only one thing, that is my dream, a golden dream-the dream of Free India.... Never forget the 18th of April,1930, the day of the eastern Rebellion in Chittagong... Write in red letters in the core of your hearts the names of the patriots who have sacrificed their lives at the altar of India’s freedom." Sen was given a burial at sea in the Bay of Bengal.